You may already know this story, city girl goes out into the wilderness, but let me tell you how it felt. You may be familiar with the celebration of the Cosmic New Year on the 19th of August. Well this year I decided to partake in the dance called Panevritmia, performed at the Rila lakes in Bulgaria. The night prior to the event I was overwhelmed with excitement and could barely sleep. I woke up at 5am and got up to go to the bathroom. I took a shower and returned to my room where my friend, who had taken me to take part in this year’s dance, was still asleep so I went outside to wait for her to wake up. I sat on a bench outside the chalet and looked out at the peaceful mountainside. Slowly beams of light pierced through the tips of the pine trees and illuminated the dark sky. The rays gradually got thicker and eventually an orange arc emerged and pushed the fingers of light up till it formed a full golden circle - the sun. It looked like it was smiling at me as if to tell me “Today will be a day like no other.” by now my friend had woken up - she came out to join me outside. The cafe had just opened, so we went in an ordered our morning coffees. The time came for us to head on up to the lakeside where the celebratory dance takes place annually. We headed over to the lift since as I mentioned, I am a city girl and don’t know my way around these mountains. As the lift took us higher, I saw birds waking up and singing their morning songs, I watched the dew roll off the leaves and the glorious wonders that we’ve been blessed with witnessing. As we reached the end of our ride, I stepped off the lift car and realized there was still a fair bit of climbing even though we have traveled with the lift halfway up the mountain already. I thought to myself “There’s no way I can handle this hike.” I turned around and noticed the sun still smiling at me and with a wink it told me I could do it. So, I faced the mountain and started walking. Slowly but surely, step by step, slippery stone by prickly twig I crept up the mountain. Along the way hundreds of others passed by some stopped and talked to me others cheered on my dedication and there were those who motivated me with the sheer resolve that they powered up the hill with themselves. In the end we reached the lakeside where the dance takes place and I looked around at all these people who just this morning seemed like strangers and saw them now as brothers and sisters instead. We sat down to take a little break and one of the organizers came by to tell us that if we were going to take part in the dance we needed to take off our shoes and be wearing only the white robes we had brought with us. “Barefoot on this freshly cut grass?” I thought to myself. “If take off my shoes and dance in bare feet I’ll get back with bloodied feet.” I gave the sun another look to see what he thought of all this. He laughed at me and gave me a slight burn on my cheek as though to say “Come on don’t be such a sissy.” I figured “Well I’ve come all this way I might as well take my shoes off otherwise that whole walk will have been for nothing.” So I took one shoe off and lowered my foot to the ground. As soon as it touched the grass the fear in my heart was washed away with a warm sensation as it felt as though I just stepped into a field of cotton. I got up and we got into partners in a circle. I was a little timid because I didn’t know the moves but my partner smiled at me and said; “Don’t worry, just follow me and do as I do.” Reassured I started copying her movements. Pretty soon I noticed that the dance consisted of a short choreography that repeats so the first time round I watched my partner and copied. The following times I strived to sense the movements and feel what was happening to and around me. Every time I brought my hands in I could feel the cosmic energy flowing into me and every time I opened up my arms again I felt as though my energy was going out into the world. It was like I was breathing this cosmic energy and each movement was an inhalation or an exhalation. I was a conduit for this exchange of breath between the universe and the Earth. Eventually when the dance was over we all took out some food that we had brought with us to share. We ate and talked about what we had just experienced. I felt so close to everyone as though we were one. Once the time came for us to return to the chalet we hiked down the mountain and I could no longer feel the prickly twigs and slippery stones, I felt as though I was floating along the path and glowing. I have to say that this was an experience I never expected and I recommend wholeheartedly that each and every one of you go and experience the wonder and the magic of the Panevritmia dance at the Rila lakes that is performed annually on the 19th of August. It showed this city girl a whole new world and I’m positive it can change your life as well.

To prepare the cake:

Mix the sugar and the eggs, add the semolina then the vanilla, the baking powder and mix well.

Pour in a baking tray which you have greased. Bake for about 30 minutes on 180 C. When it is ready

Pour the syrup (without the pieces of lemon) over the cake. For best results, the cake has to be cold when the hot syrup is poured over it. Now it’s ready to be cut and served. 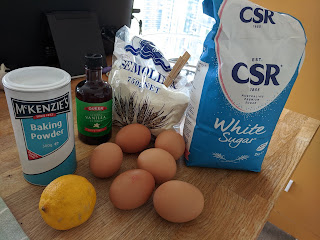 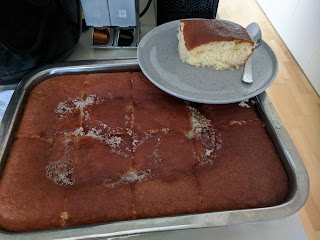 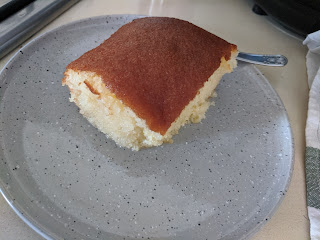 Leave in the fridge overnight

In the morning fry in butter till they are brown

Serve with love and imagination. 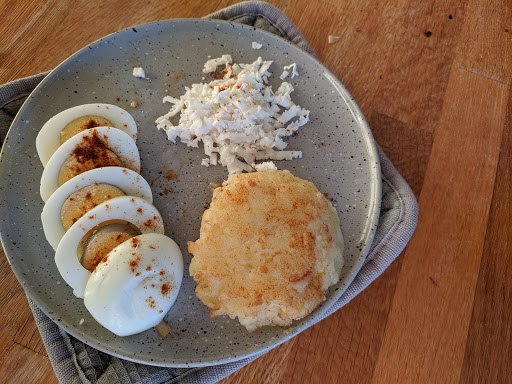 Mix add sugar and yeast to the water mix and leave for 10 minutes. Add the salt and mix again. Add the flour knead and leave the dough to ferment for about 20 minutes. Pull out small balls from the dough pull into flat circles and fry.

Serve sprinkled with sugar or you may prefer to add marmalade. 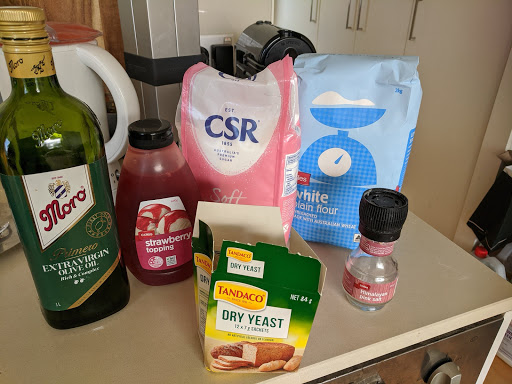 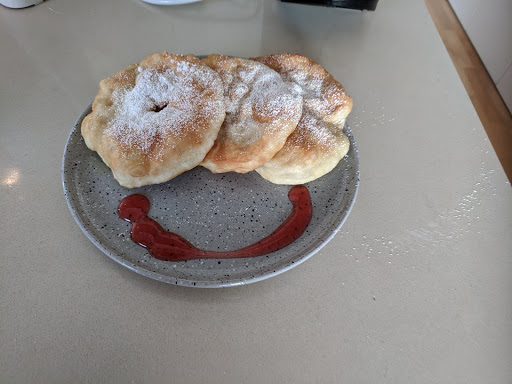